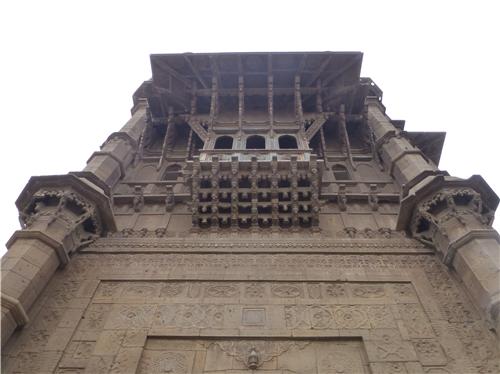 Bijapur, the historical city of Karnataka contains some of the finest examples of Islamic and Hindu architecture in the Deccan. The Adil Shahi Dynasty ruled the southern part of India Between the 15th and 17th centuries. The dynasty was founded by the Government of Bijapur and the rulers of the dynasty were great patrons of art and architecture in the early 17th century, Mehtar mehal was one of the city's most beautiful structures. Mehatar mahal, an ornamental gateway which leads a mosque and a beautiful garden, located a few kilometers from Bijapur. Actually it is not a palace even though is called a Mahal. This gateway is also known as sweeper’s palace and is believed to be dating back to 1620 AD. It is supposed to have been built by a sweeper with the handsome gift he received from the Ibrahim Adil Shah I. Apart from this there are many interesting stories about Mehatar Mahal.

Attractions of Mehatar Mahal in Bijapur

This mahal was highly decorated with stone bracket carvings and the carvings of birds and rows of swans beautify the stone brackets. Highlight of mehatar mahal is stone elephant and the motif. Its flat stone roof is always a puzzle to engineer which is supported by finely carved stone brackets of birds and rows of swans. The fineness of the works in this mahal is astounding, and the stone being manipulated as it were plastic clay. The carvings of the low relief pattern around the doorway and the deep molding of the coffered ceiling of the ground floor all is well executed with a loving and it recalls the artists of Italian Quottro-Cento.

The entry gate of this mahal is built in Indo-Saracenic style and this storied place has beautifully carved arches. The ground floor entrance hall in Mehtar mahal has a staircase that leads to a room above. The grand minarets of this gateway are delicately designed with the pictures of birds and swans. The carvings in mehtar mahal are crafted in Hindu architecture style with brackets that supports the balconies and stone trellis work. The mosque behind this gateway which believed to be built by the sweeper of the palace by collecting the money that was showered by the king upon him and it does not have a dome roof. The carvings of the motif of lion is the perfect blend of perfection and artwork that take to back the golden time of artist who came from different parts of the world to make their masterpieces with handiworks.

The first floor of these two storeyed structures is an ambulatory and the ceiling of this mahal is a stone lattice. There are beautiful latticework beam suspensions in the central hall on the way to the second floor. The windows of this Mahal are very interesting and the balconies projecting to the street are supported on angled struts carved as if they were made of wood. This ornamental gateway takes pride in being, one of the finest architectural monument of India.

Mehtar mahal is open from morning to evening every day and the best time to visit this Mahal is October to February. Because the weather in Bijapur is remains pleasant during this time.