The district was established during the Adil Shahi dynasty and has some of the most renowned historic monuments built during their time followed by some built by the Mughals who had ruled the district for a very long time. But the cuisine of this part of Karnataka is more influenced by the tribes, which is why, dishes made with leaves and wild flowers are quite popular. The regular Kannada dishes are cooked and eaten differently in Bijapur. One of the most commonly savored dishes of Bijapur is the Pundi Palya, made from Sorrel Leaves which are referred to as Pundi Sopu in Kannada while Palya means Sabzi in Hindi, curry being its closest translation in English. This delicacy was introduced by the tribal people who began living in this part of the state of Karnataka after the people from Central Asia moved to India along with the Mughals. It is extremely easy to make and takes very little time.
Let’s find out how to make this simple savory dish originating right from the original settlers of Bijapur. 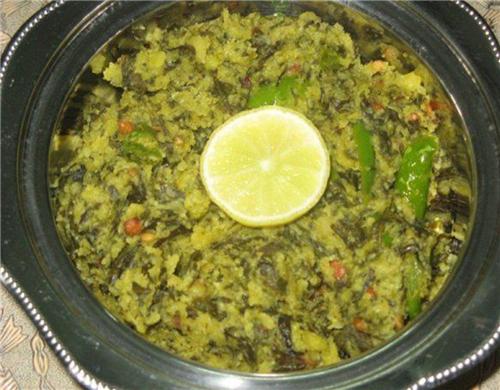 It is a fairly simple dish which can be prepared anywhere, provided the right ingredients are used for it.
At first the Sorrel leaves should be picked from the stem and chopped properly after being washed thoroughly. Keep the leaves aside to dry up a little.

Then boil the Tuvar Dal with a little salt until it becomes soft and begins to mix with the water it is boiled in. Then add a pinch of Turmeric powder and mix it well.

Following this, heat the oil in a pan and put in the mustard seeds, sliced green chillies, turmeric powder and let it splatter while mixing it at medium heat so that the seeds of the green chillies do not pop out of the cooking pan. Now simply add the sorrel leaves and sauté for about 1 minute, add salt and the boiled Tuvar Dal and mix it well. The mixture will be quite watery, so let it cook till the excess water has evaporated from it. This evaporation process takes a little bit of time due to the water of the Dal and the natural water in the leaves, but be careful not to burn it. Keep it at medium heat to let it evaporate slowly and avoid burning the dish.

Once it is completely cooked, you can serve it hot Chapatis and onion slices. If you like you can even add a few drops of lemon to enhance the taste of the dish.

The most interesting thing about this dish is that it can be modified as per your taste, as even I have tried doing. Since I am big garlic fan, I added some crushed or chopped garlic to while frying the mustard seeds and chillies, which enhanced its taste further. You can add chopped tomatoes, onions and even red chilli powder to experiment with this particular Kannada delicacy. Get ready to experiment with the flavors of the culturally diverse Bijapur adding a little of something of your own to it.